Video creation can be very time consuming and I hate wasting time...

And that's the problem FlexClip set out to solve.

Their goal is to make creating beautiful videos simple and quick, so... but do they live up to the hype?

I used it for about a month and in this post I'll go over:

You have two options when creating a video: start from one of their templates or create from scratch.

They have hundreds (if not thousands) of templates for every social network out there. 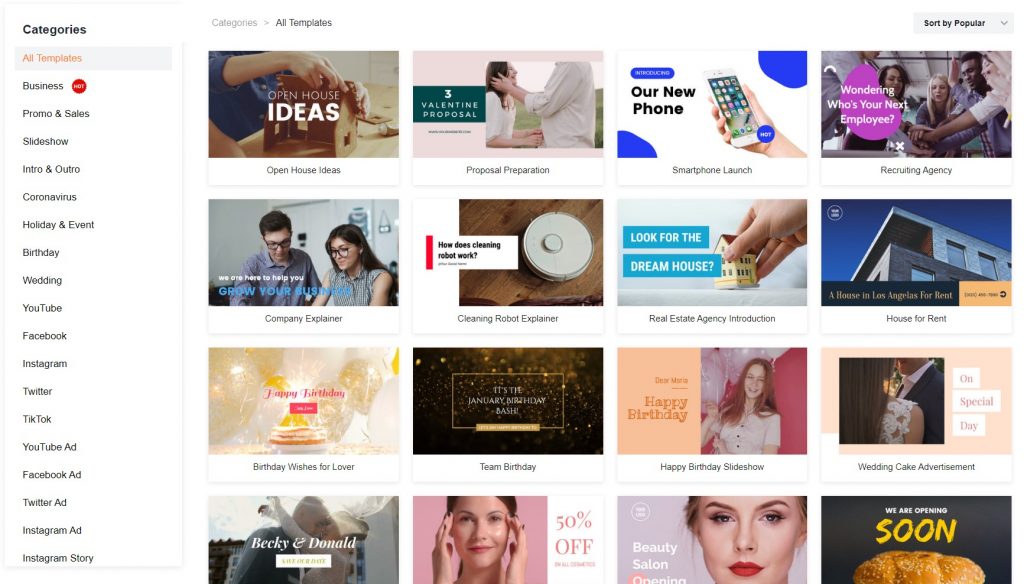 Of course this also means you can pick any aspect ratio for the video you create and change it on the fly! 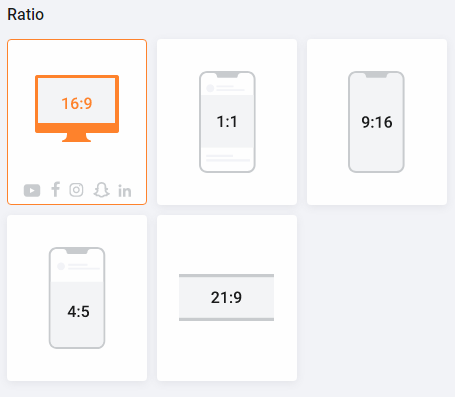 The video elements even move around & resize when you change the aspect ratio! 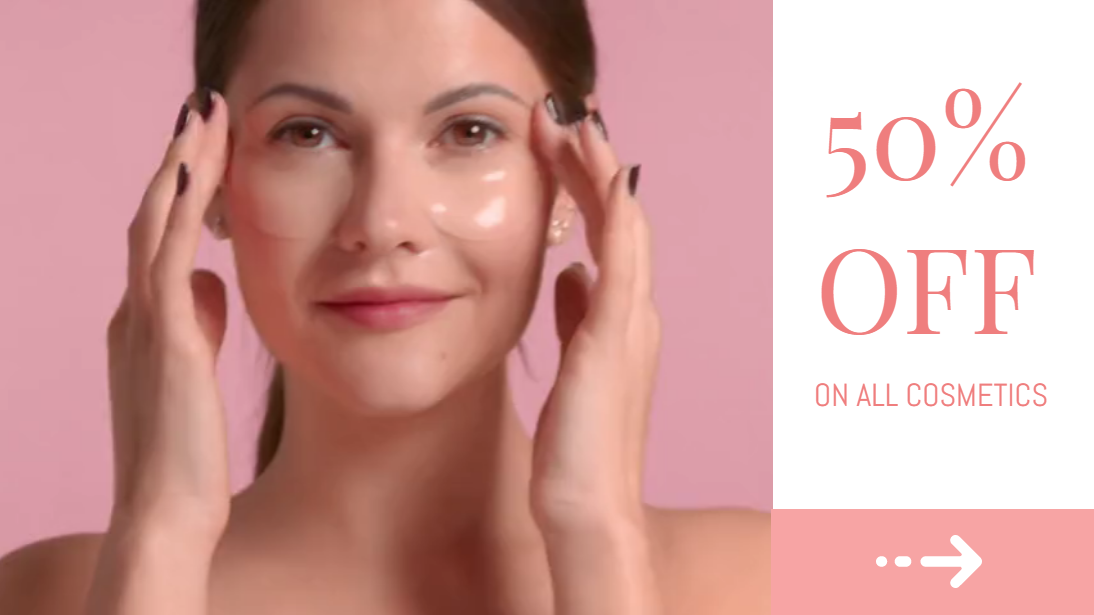 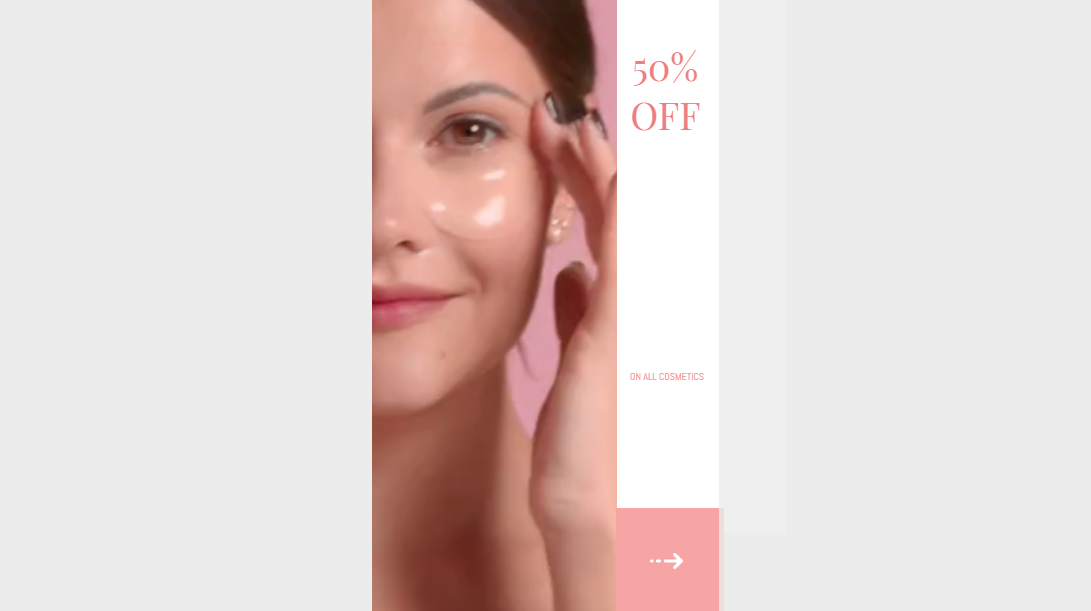 This is what the main video editor looks like:

They also have an Advanced Editor, but it's in beta so I'll talk about it later in the post.

This editor may look simple, and that's because it is! But don't be fooled by the simplicity. It's simple and powerful.

One of my favorite things about FlexClip is how easy and fast stock video selection is.

In pretty much every other app I've used you have to pick a video one by one, trip it, add it to a scene, and then repeat the process...

But with FlexClip you can search up whatever keywords you think of and add multiple videos at a time into your library which you can then pull from when creating videos.

First you search up a keyword and get the results:

Then you select all the videos you want to add to your library for the project:

The videos with the checkmark are the ones I want to add to my library.

And then you can add those videos into the different scenes from within the timeline: 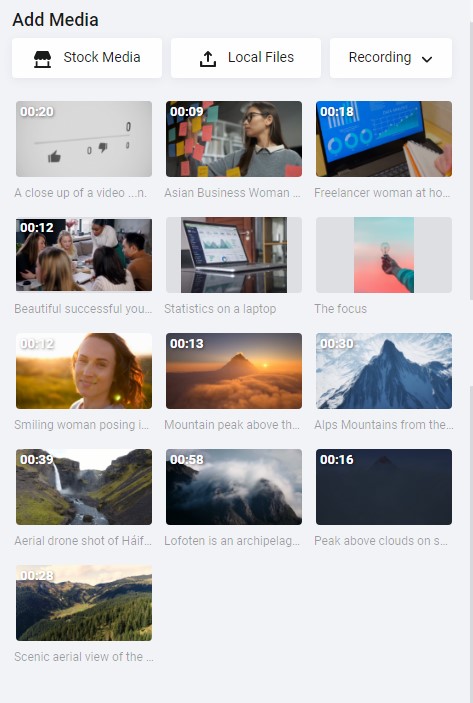 This is a unique feature that only Vidnami has as of right now.

You can record your webcam or your screen straight inside the browser window. No plugins necessary!

The webcam recording does capture sound from your microphone and while it was a bit laggy for me, that's likely due to all the windows I had open during testing.

The screen recording works fine, has no lag, but only captures whatever sound you are hearing from your computer.

It doesn't capture your microphone's input which could be a plus or a minus depending on what you need. (Although if you just need screen recordings you might as well use something like Loom instead.)

If you've used any other video editing app you already know what to expect.

And if you haven't, it's simple enough to pick up in minutes!

Each scene can be quickly previewed, you can add transitions between scenes, and you an also record a voiceover on a per-scene basis.

You can't add a voiceover and music to the entire video though. You either have to pick one, combine them in a tool like Audacity, or record your voice-overs on a per-scene basis.

This shouldn't be a huge issue though because this tool feels more designed for quick & voiceless marketing videos rather than big voiceover-based projects.

Like every other self-respecting video-creation tool out there they have a ton of dynamic text presets to keep your videos exciting. 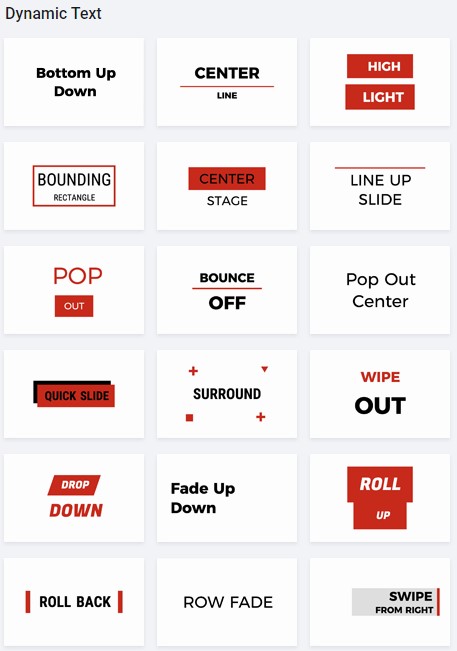 But, of course, that's not all!

They also have a bunch of overlays: 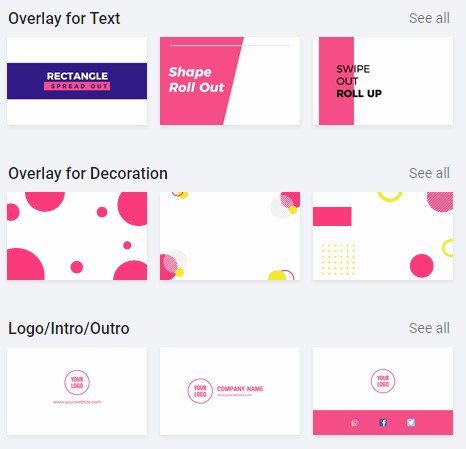 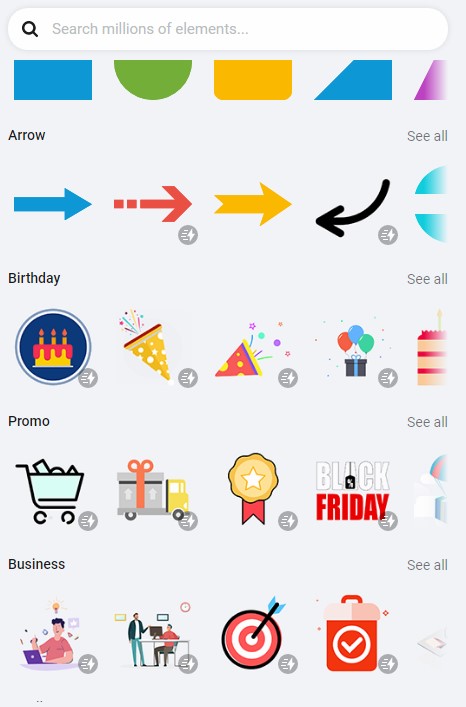 And a bunch of pre-set stock video & photo backgrounds: 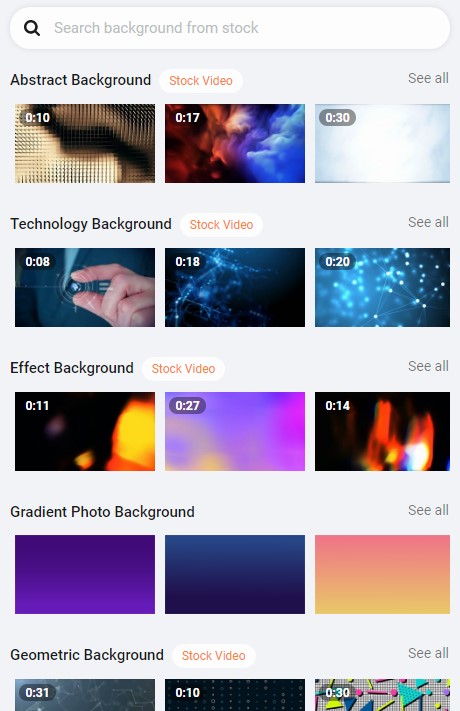 Out of all these features you'll probably be using the dynamic text and the animated elements the most, although I pretty much exclusively use the non-animated features because I have Animaker to deal with all the animated content.

Like almost every other video-creation tool out there they use the StoryBlocks audio library for the music, but they do it better.

They actually show you the wavelength of the music you're selecting and let you play the song from any point.

Why is that important?

So many songs start out slow and peaceful and then switch to exciting halfway through or just shift from what they sound like at the start.

This means that if you select a song by listening to the first ~5 seconds (like Vidnami or InVideo allow you to do) you'll often select songs that don't actually work with the entire video!

I've lost count of how many times I would think a song is PERFECT and realize during preview that 30 or 60 seconds in it shifts completely and I need a different song.

And, of course, you can add your own music if you'd like.

While this isn't critical, if you're creating videos for someone and you get paid upon completion you might want to use this feature for the drafts you send over to your clients.

Although I firmly believe if you're working with clients where you feel like you have to watermark your videos or they'll steal them... then you should find some other clients!

This is still useful for branding purposes though which is why I've included it here.

You can either add a text (meh) or an image/logo (better!)

This editor is currently in beta and reminds me a lot of InVideo's advanced editor.

Since it's in beta you can only upload your own videos and create content from that, but once you can add stock-footage and create from there this will be an absolute game changer.

It basically brings the power of a quality, but simple video editor into the browser.

This is especially critical because the basic editor doesn't let you control the entry/exit points of all the media which is fine for simple videos, but not nearly enough for big/advanced projects.

What's Not So Good

If you're a business owner or freelancer looking to create some quick & simple marketing videos then this is perfect for you!

InVideo is comparable to FlexClip, but while InVideo used to be really good it quickly became very bloated and slow so if you're looking to create some simple videos, this is the better option.

They have a free tier which lets you try out the program and Basic pricing starts at $4.99. (Annual plan) 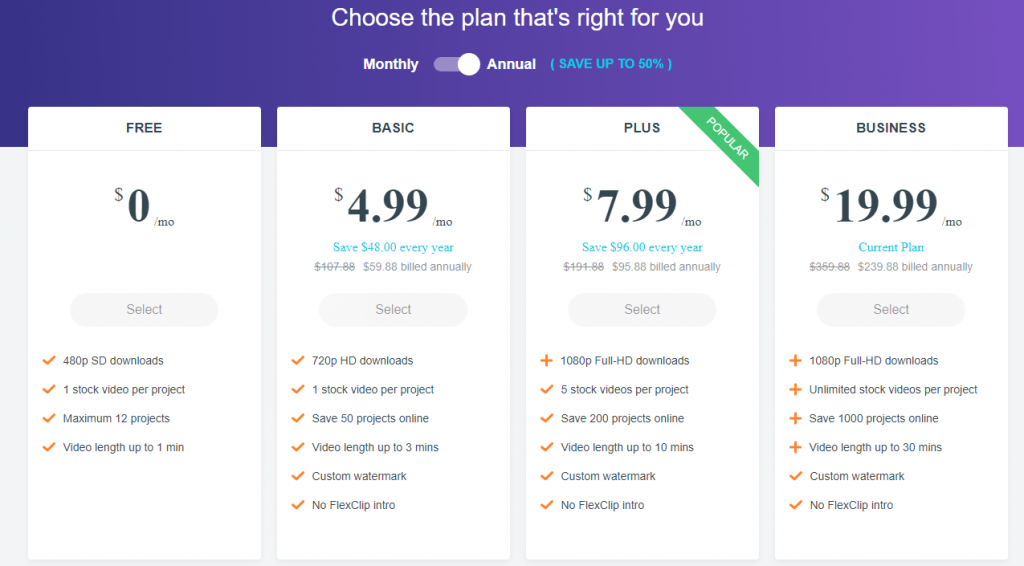 Don't be fooled though because this tier is pretty much useless unless you're planning on using it to edit your own pre-recorded videos.

Because you can only use 1 stock video per project on the basic tier.

That's why the Plus plan is the lowest tier that would make sense for most people. At $7.99/month (annual plan) it's a little cheaper than InVideo, but it still limits you to only 5 stock videos per project.

If you want to use more than that you'd have to pay up for their Business plan which costs $19.99/month (annual plan) for the privilege of using unlimited stock videos per project.

Considering that the videos come from Storyblocks (which is where InVideo, Vidnami, and most tools get their video) limiting pricing based on how many videos you can use doesn't make sense.

Plus, their monthly plans are nearly double the price of their annual plans so they get quite expensive for a tool of this caliber.

If you're reading this you can get a 10% discount for any FlexClip plan by using the code ILYAVP10 at checkout. Not bad, right?

If you stack that with their annual 50% off discount, you can get up to ~55% off the sticker price!

YES, I WANT TO TRY FLEXCLIP!

Even though they have some issues with pricing & stock footage limits, this is a very new tool and their team has been open to feedback so I'm confident their plans will change based on market feedback.

If you're looking for a simple way to quickly create promotional videos for social media then this is a great tool to at least try out!

Plus, once their advanced editor is released you'll have a lot more power in your hands to create some beautiful looking videos that will feel professional, but at 1/100th of the cost. 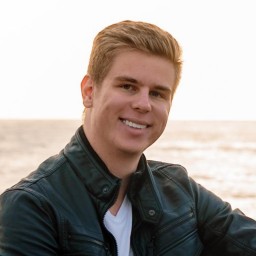 Ilya has been in the digital marketing game for nearly 8 years. Affiliate sites, greyhat link building, whitehat link buildling, funnels, copywriting. You name it - he's probably done it.
In his free time he also writes on IlyaVP.com

Ilya has been in the digital marketing game for nearly 8 years. Affiliate sites, greyhat link building, whitehat link buildling, funnels, copywriting. You name it - he's probably done it. In his free time he also writes on IlyaVP.com

Please log in again. The login page will open in a new tab. After logging in you can close it and return to this page.